In 2014, the Ebola epidemic hit West Africa, leaving governments, health organizations and biopharma companies scrambling for solutions. As the epidemic escalated, companies partnered to advance the few available vaccine candidates, none of which had reached clinical trials. “When there’s a public health emergency, you’re looking for anything,” said Swati Gupta, executive director of public health and scientific affairs for Merck Vaccines. By the time the Ebola outbreak began to ebb in 2015, at least four vaccines had entered first-in-human trials (Table 1).

No sooner had the Ebola epidemic started to subside, however, than another infectious disease risk emerged. Zika virus started spreading through South America in 2015, and it is now threatening to become a global pandemic. Although vaccine developers are again jumping into action, this time they have even more work to do. Little is known about the pathogenic mechanisms of Zika virus, and there are as yet no clinic-ready vaccine candidates to work with.

These public health crises have spurred companies to rapidly explore new collaborative models of vaccine development. “At Sanofi-Pasteur we believe partnerships are really critical to addressing these emerging threats,” said Jon Heinrichs, associate VP in global projects leadership at Sanofi’s vaccines business Sanofi-Pasteur. The crises have also highlighted a pressing need for greater funding to tackle such threats; even companies as large as Sanofi-Pasteur, with vast manufacturing and clinical development resources, are constrained by what they can do—and what they can fund—on their own. “Working with biotechs and government agencies or other vaccines companies, as well as both non-government and government funding sources, is critically important,” said Heinrichs.

As the Ebola outbreak unfolded in 2014, several major vaccine manufacturers licensed in partially developed vaccine candidates and built public–private consortia to help fund and coordinate the development of an Ebola vaccine (Table 1). In October 2014, for instance, Johnson & Johnson’s Janssen Pharmaceuticals unit licensed an Ebola vaccine from Bavarian Nordic, to combine with its own vaccine, in a deal worth $25 million up front.

Janssen has since worked with various academic partners, including the London School of Hygiene & Tropical Medicine and the University of Oxford, to coordinate its clinical trials program. This began in earnest in 2015, with funding sources including the European Innovative Medicines Initiative and the US Office of Biomedical Advanced Research and Development Authority (BARDA). Johan Van Hoof, Janssen global therapeutic area head for infectious diseases and vaccines, said that to date the company has conducted ten trials across Africa, the United States and Europe; Janssen published promising phase 1 trial results in April (1).

Merck’s work in this space also highlights the key role of partnerships. The company evaluated the field from every angle, said Gupta, before signing a deal with NewLink Genetics in November 2014. Although NewLink is better known for its portfolio of immunooncology candidates, it possessed an Ebola vaccine candidate, rVSV-ZEBOV that was backed by a wealth of data from non-human primate studies. “There were doses of vaccine already available that were in the freezer,” said Gupta. Merck paid NewLink $30 million up front, and the biotech received a $20 million milestone payment when clinical trials began in early 2015.

NewLink’s Ebola vaccine was initially developed by the Public Health Agency of Canada, from which NewLink licensed the project in 2010, years before the most recent major Ebola crisis. At the time, “to us it looked like a very interesting candidate platform for making vaccines,” said Thomas Monath, chief scientific officer of NewLink’s infectious diseases division. With various sources of governmental funding for Ebola vaccines, NewLink anticipated “the prospect of significant grants and contracts for further development, and the potential for stockpiling for preparedness and biodefense,” said Monath. Grants from BARDA and the US Department of Defense in 2014 and 2015 totaled more than $56 million and provided NewLink and partner Merck with a path forward. Merck published encouraging phase 1 trial results in April (2).

“It was an amazing effort over the last 18 months by all of our partners and we’ve accomplished a tremendous amount, but we started from a good place. You don’t often have this data available when an outbreak hits; you don’t always have clinical-trial-grade doses of the vaccine,” said Gupta.

Van Hoof expressed similar sentiments about Janssen’s Ebola program. The high sense of urgency among all stakeholders involved in the Ebola effort was a “unique and positive experience” in his 25‑year career in vaccine development, he added.

'When something like this happens it demands an immediate response, but there’s no pot of money to dip into' Thomas Monath, chief scientific officer, infectious diseases, NewLink Genetics 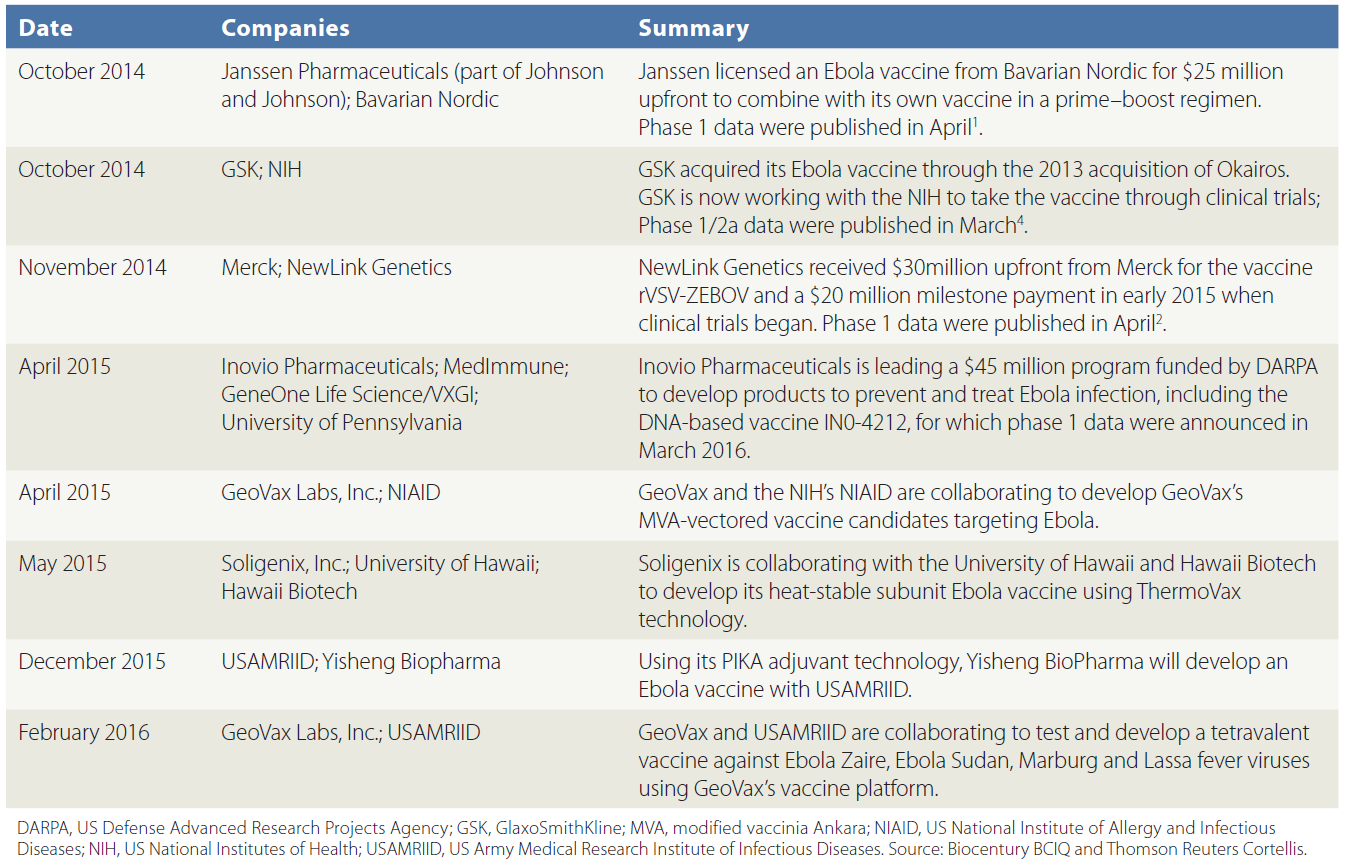 Van Hoof and others hope this kind of collaborative momentum can be carried over to efforts to thwart Zika. However, it is not realistic to expect trials of vaccine and drug candidates to begin as quickly as they did in response to the Ebola outbreak. In March 2016, one month after Zika was declared a public health emergency, a World Health Organization (WHO) analysis of the Zika landscape revealed 18 active vaccine programs against the virus, but none had yet reached the clinic (Table 2). In addition, no established animal models of Zika virus are yet available (3).

Nevertheless, successfully developed vaccines against related viruses may provide a technical boost. In February 2016, Sanofi-Pasteur said it had jumped into the Zika vaccine fray, citing its expertise in vaccines against similar flaviviruses, including yellow fever, Japanese encephalitis and Dengue fever. “We’re very well suited to addressing Zika and we’re working with partners on multiple approaches,” said Heinrichs. “We’re taking a holistic approach to bring forward vaccines [based on the ChimeriVax platform] that will be rapidly evaluated for treating Zika, as well as more long-term approaches,” he added. The company’s ChimeriVax platform can incorporate genes that encode relevant proteins expressed on the surface of flaviviruses like Zika into a widely used yellow fever vaccine that is already deemed safe and effective. Regulators recently licensed the company’s live attenuated Dengue fever vaccine Dengvaxia—which came out of the ChimeriVax platform—for use in several regions where Dengue is endemic.

By December 2015, the WHO said it had received $450 million in funds from governments and multilateral organizations to combat the Ebola crisis. Companies that have been involved in the responses to the Ebola and Zika crises argue, however, is that there is a need for greater—and more consistent—funding before pandemics hit in order to foster work on potential vaccines.

Indeed, a lack of available funding may be the greatest hurdle for smaller companies pursuing potential vaccines for pandemics such as Ebola and Zika. The biotech Novavax has waded into emerging virus vaccine development four times in the past three years, said CEO Stan Erck, citing the company’s efforts in pandemic flu, Middle East Respiratory Syndrome (MERS) and Ebola, and most recently its burgeoning work against Zika. But Erck lamented the slow response from government funding sources. An Ebola vaccine developed by Novavax “sits on the shelf because no funding’s been made available for late-stage development,” he said.

Access to traditional venture capital funding sources is rare for projects focusing solely on pandemics. Companies instead have to act opportunistically or speculatively to advance their projects. For instance, NewLink recognized that it might attract grant money related to Ebola that could be used to help develop the biotech’s vaccines platform in general. Novavax’s $1.5 billion market value is overwhelmingly pegged to its lead respiratory syncytial virus vaccine program, but the biotech’s recombinant nanoparticle vaccine platform can be applied to less traditional opportunities, as in the case of its various speculative forays into vaccines for pandemic pathogens. 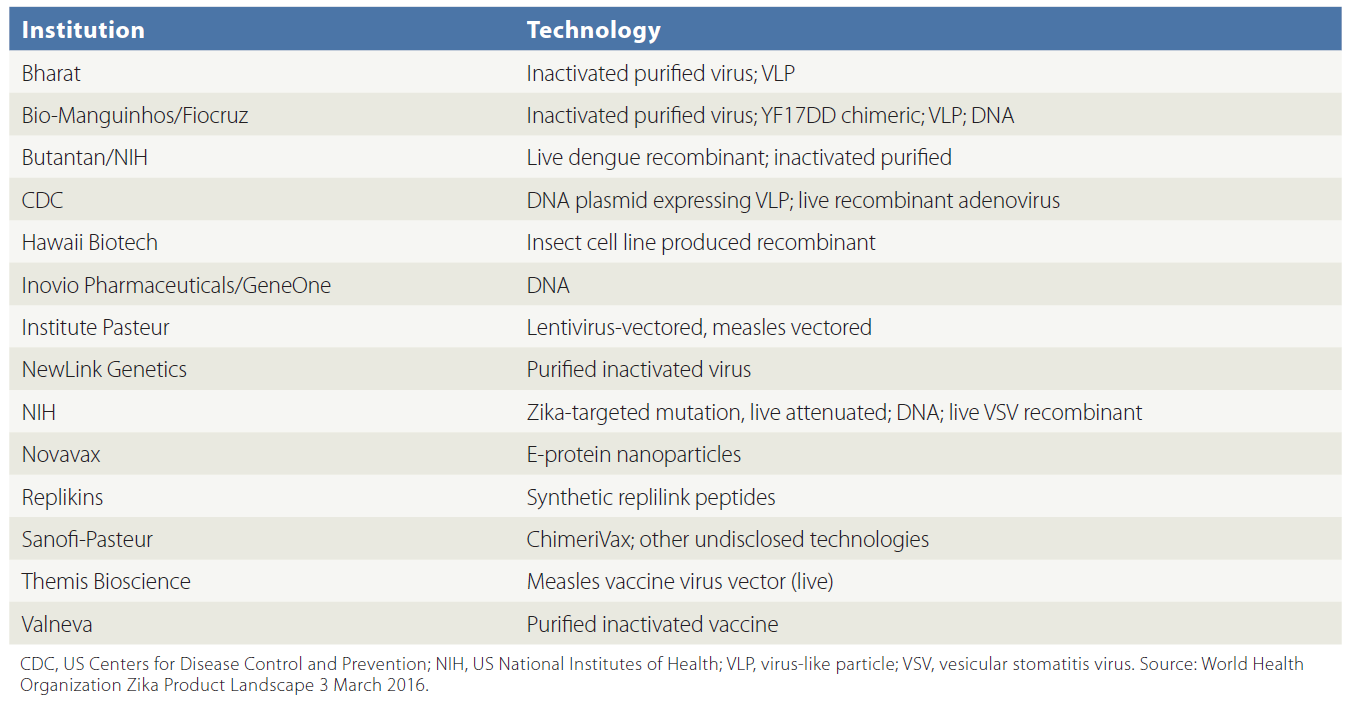 One experiment in biopreparedness funding from the private sector—Kleiner Perkins Caufield & Byers’ $200 million KPCB Pandemic and BioDefense Fund in 2006—hasn’t been repeated. The KPCB fund backed Novavax and flu-fighter BioCryst, among others, but KPCB declined to raise a second, similar fund and no other venture capital fund has attempted anything similar.

On April 12, the US Congress passed a bill that added Zika virus to the list of diseases for which companies can earn a transferrable Priority Review Voucher (PRV) if they successfully develop a drug or vaccine (Ebola virus was added to this list in December 2014). These vouchers—which enable access to an 8-month regulatory priority review from the US Food and Drug Administration instead of the standard 12‑month review—have been sold for as much as $350 million on the open market.

But are biotechs given enough incentive to take the necessary risks to tackle Zika or any of the dozens of pathogens identified by the WHO as priorities for vaccine development? “That’s a resounding no,” according to NewLink’s Monath, because there’s still no pre-positioned source of funding. “When something like this happens it demands an immediate response, but there’s no pot of money to dip into.”

As yet, Congress has not authorized requests for additional Zika funding from the US government. “Congress is two months late and $1.9 billion short in providing the assistance that our public health professionals say that they need to make sure that they respond appropriately to the situation,” said Obama Administration press secretary Josh Earnest in an April press briefing.

More than a few ‘lessons learned’ reports have been published in the wake of the Ebola outbreak, but Zika came so soon on its heels that those lessons—better outbreak detection systems, for example—haven’t yet been implemented. The WHO has created an R&D blueprint for a list of priority pathogens; industry and academic institutions are now working to identify gaps and, crucially, secure R&D funding to fill those gaps. Meanwhile, clinical study designs, regulatory pathways and liability issues can be worked out in advance so that, in the face of an outbreak, drug and vaccine developers can follow an expedited route to licensure. GlaxoSmithKline is proactively working with governments around the world to establish a “biopreparedness platform” that would allow the company to dedicate resources to work in collaboration with academic and government institutions and build up an arsenal against the threats identified by the WHO, said GSK Vaccines president Luc Debruyne, “so that when the next Zika happens, the world is ready”.

Chris Morrison is a freelance analyst, editor and writer who reports on the biotechnology and pharmaceutical industries.

Back to Infectious Diseases
Next

Unravelling the potential of nucleic-acid-based drugs

From the publishers of Nature, BioPharma Dealmakers brings together life sciences companies and individuals looking to identify and attract partners and dealmaking opportunities. With a quarterly magazine that is distributed in Nature Biotechnology and Nature Reviews Drug Discovery, BioPharma Dealmakers provides insights into dealmaking trends and profiles from companies looking to partner – showcasing their pipeline products, technologies, therapeutic focus and partnering strategies.
Follow

Our November 2019 edition is live

Ebbs and flows in the infectious disease market

Raveena Bhambra
BioPharma Dealmakers
We use cookies to help improve your experience. By continuing to browse our website you are consenting to our use of cookies.
Learn more