Trends in pharmaceutical mergers and acquisitions

The number of mergers and acquisitions in the pharmaceutical industry has continued to rise, with oncology being a particularly active area and assets increasingly being acquired at earlier stages of their development.

2015 was another big year for mergers and acquisitions (M&A) in the pharmaceutical industry. There were 468 announced deals involving therapeutic drug assets, devices, diagnostics and insurance companies, according to data from Thomson Reuters, representing a 10% increase over 2014 and a 90% increase over 2012, when dealmaking hit a 10-year low (Fig. 1). This extends a trend of an increasing number of deals, beginning in 2013 after a sustained decrease during the economic downturn around 2008. 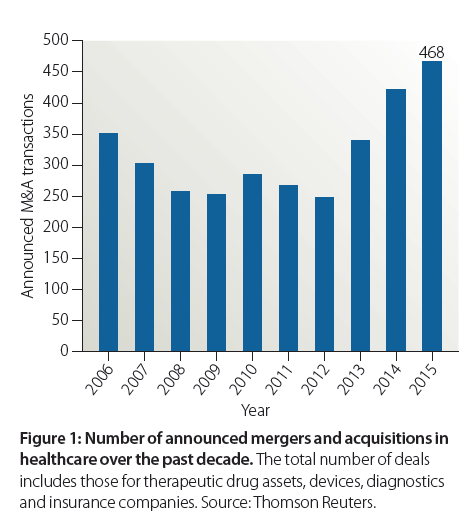 Of the healthcare M&A deals announced in 2015, there were 123 deals for which a core therapy area could be identified (Fig. 2). Of these deals, the largest proportion (38%) were for diversified assets, meaning the acquired company is active in two or more core therapeutic areas, none of which predominate. Examples of these companies include generics companies with broad portfolios, and some specialty pharmaceutical companies, which focus their portfolios on drugs for clinical specialties or grow by merging with or acquiring other specialty pharmaceutical companies.

Cancer was the therapeutic area with the greatest number of deals (15% of the total), reflecting the large current interest and focus in this area, most notably in immuno-oncology approaches. With recent breakthroughs, such as the approval of immune checkpoint inhibitors, demonstrating the power of harnessing the immune system to attack tumors, leading pharmaceutical companies are highly active in both M&A and other deals for immuno-oncology assets (March 2016 BioPharma DealmakersBioPharma Dealmakers, pB2). Other therapy areas with significant deal numbers included infectious diseases (9% of the total), central nervous system disorders (7%), endocrine and metabolic disorders (7%) and inflammation (6%) (Fig. 2). 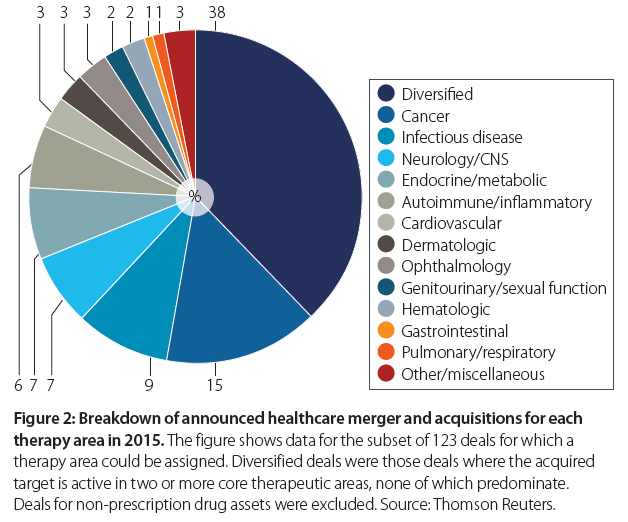 One of the most interesting trends to emerge from data on M&As in recent years is the shift in the development stage of the assets when the deals are announced. Increasingly, more assets are being acquired at earlier stages of development (Fig. 3). Averaging over the deals in 2009–2013 (the trends for which were roughly constant), more than half of all deals (54%) were for assets that had already received regulatory approval, and only 9% of deals were for assets that were at the preclinical stage. However, in 2014, the proportion of deals for preclinical assets increased to 22% and the proportion of deals for phase 1 assets increased to 14% from 6% in 2009–2013.

These increases were at the expense of deals for approved assets, which dropped to 30% in 2014. A similar trend is apparent in the M&A data for 2015 (Fig. 3), and it also appears to be independent of the therapy area (data not shown).

There are multiple possible reasons for this trend. The most obvious is that the most promising late-stage candidates have increasingly already been acquired, forcing companies to look earlier in the pipeline. However, we believe that there are more deliberate reasons for this trend. Many of these deals are contingency deals, in which the seller accepts a lower upfront payment in return for larger payments upon completion of defined milestones and a greater percentage of the eventual profits. These deals help the buyer to mitigate the inherent risk in acquiring early-stage assets. Of the deals that disclosed information concerning the financial terms (Fig. 3), approximately 40% were done via contingency structures. We see contingency deals becoming increasingly common for early-stage assets, as well as more prevalent in other stages. Such deal structures can be particularly advantageous if there are differing views on sales projections.

A second, and more optimistic, possible reason for the shift toward M&A deals for early-stage assets is coming from two synergistic forces. The first is the availability of high-quality early-stage assets. This is evident in the increasing success rate for transition between phases. Data from CMR International indicate that for 2014, compounds entering phase 2 trials had a 25% chance of advancing into phase 3, up from 17% in 2009. This suggests that scientific and strategic advances are helping to de-risk early-stage assets, increasing the willingness of pharmaceutical companies to engage in M&A earlier in the development cycle. 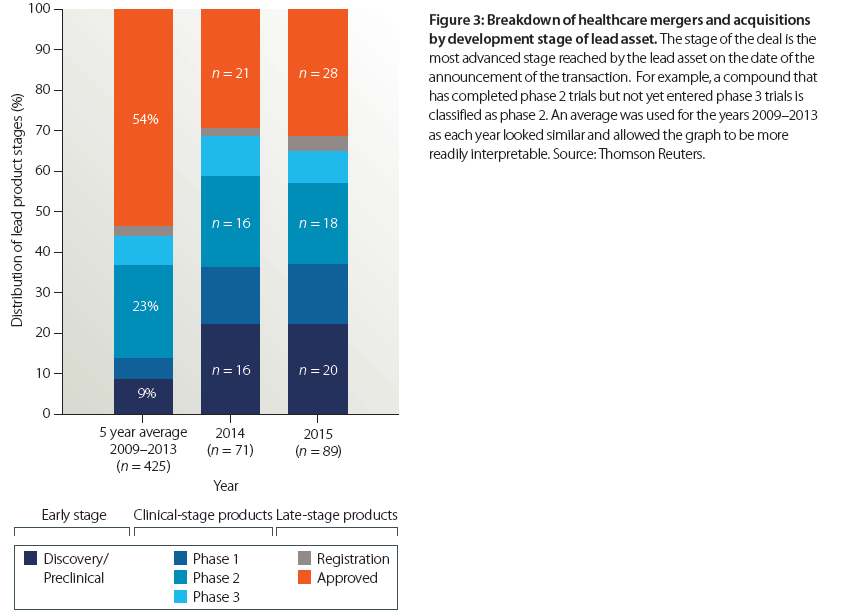 Lastly, at the heart of all of these deals is the value. The total value of all healthcare deals in 2015 was $355 billion, a 12% increase over the previous record of $288 billion in 2014 (Fig. 4). Looking at the value by size of the deal, since 2013 there has been an increase in all deal values more than $1billion, suggesting that it is not only the big M&A deals that are responsible for the increase in aggregate deal value.

These trends in deal volume and size indicate that the pharmaceutical industry has weathered the financial crisis and much of the patent cliff. So far, the increasing pressure on drug prices has not dampened M&A activity, although this may change in the next few years. Acquisition activity continues to be spurred on by the real progress against disease being demonstrated in areas such as oncology; we do not expect this to slacken. Further industry confidence comes from the approval of 45 new molecular entities by the US Food and Drug Administration in 2015, up from 41 in 2014 and 27 in 2013, and close to the record of 53 set in 1996. Overall, the trends seem promising for companies, shareholders and patients.

From the publishers of Nature, BioPharma Dealmakers brings together life sciences companies and individuals looking to identify and attract partners and dealmaking opportunities. With a quarterly magazine that is distributed in Nature Biotechnology and Nature Reviews Drug Discovery, BioPharma Dealmakers provides insights into dealmaking trends and profiles from companies looking to partner – showcasing their pipeline products, technologies, therapeutic focus and partnering strategies.
Follow

Expanding horizons in the complement pathway

Our December 2019 edition is live

Raveena Bhambra
BioPharma Dealmakers
We use cookies to help improve your experience. By continuing to browse our website you are consenting to our use of cookies.
Learn more