Icell Kealex Therapeutics is developing oncolytic vaccinia viruses armed with T-cell-engaging antibody fragments that boost the virus’s antitumor efficacy. The company is entering phase 1 trials for solid tumors with its lead product and is looking to partner with companies interested in clinical codevelopment of its wide-ranging therapeutic pipeline.

Icell Kealex Therapeutics (IKT), an oncology biotech startup based at the JLABS in Houston, Texas, is developing a novel oncolytic virus platform con­sisting of vaccinia viruses (VVs) that attack tumor cells by means of two distinct but complementary mechanisms 1–3. In addition to using tumor cells to replicate and to infect other tumor cells via the standard oncolytic cycle, IKT’s engineered VVs use their host cells to synthesize immunostimulating bispecific antibody fragments. Once secreted into the tumor microenvironment, these antibody frag­ments bind to uninfected ‘bystander’ tumor cells, turning them into targets for specific attack by the immune system. This two-pronged strategy helps to greatly improve the therapeutic efficacy of the virus.

In recent years, two of the most promising approaches to cancer therapy have been the use of oncolytic viruses to destroy tumors from within, and the development of cancer-specific immuno­stimulating strategies to engage the patient’s own immune system to destroy tumor cells. The combi­nation of both concepts into one therapeutic agent has emerged as a potentially powerful new way to target cancer, but to date only platforms combining oncolytic viruses with generic immunostimulating factors have been created. Even though some of these platforms are in advanced clinical testing, the generic nature of their immunomodulating activity has raised concerns about reduced efficacy and a lack of tumor specificity. 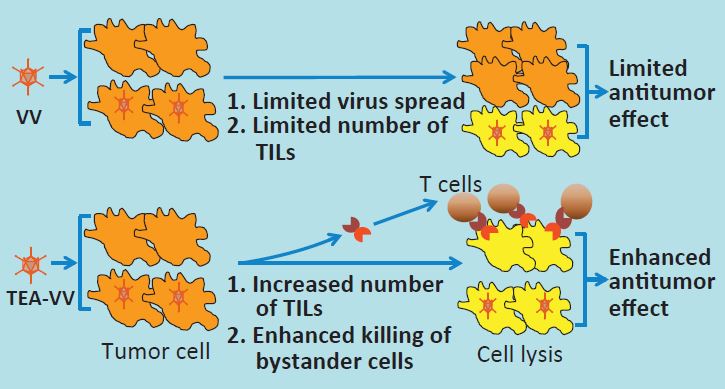 Oncolytic viruses—viruses capable of preferential replication within tumor cells—have been under development as cancer therapeutics for the bet­ter part of the past two decades. Vaccinia virus has emerged as an ideal viral backbone for engineering enhanced tumor-targeting capabilities, owing to its versatility and safety profile.

The mechanism of action of VV is a combination of the direct destruction of cells via virus-induced cell lysis and of immunostimulation in the tumor environment. Although cell lysis represents VV’s main mechanism of action, its efficiency is vari­able, and large numbers of tumor cells—the so-called bystander cells—end up evading it. Immunostimulation, on the other hand, derives from two processes secondary to cell lysis. First, the presence of the oncolytic virus itself triggers the innate immune response, and second, tumor cell destruction results in the release of a number of factors such as cytokines that can have a strong but nonspecific immunostimulatory effect.

IKT’s TEA-VVs offer a clear advantage over other oncolytic virus-based platforms and combina­tion therapies. First, the company has enlisted the Western Reserve strain to maximize oncolytic potential, and second, the targeted sensitization of bystander cells by TEA-VVs specifically induces anti­tumor immunity without activating other innate immunity mechanisms that might enhance viral clearance. In addition, localized production of the T cell engager by TEA-VV infected tumors overcomes concerns with other bi-specific antibody based ther­apies over limited tumor penetration, short half-life, and the need for continuous systemic administration.

IKT plans to move its lead product EpCAM-TEA-VV through phase 1 studies and is looking to identify partners to complete the clinical program; a phase 1 study of EpCAM-TEA-VV-loaded CAR-T cell therapy is already underway in China. All other products in the pipeline are available for codevelopment or licensing partnerships. As summed up by Song, “our flexible vaccinia virus platform in conjunction with our deep pipeline of TEA-VV products offers many opportunities for exciting partnerships with other companies in the oncology space, and we are look­ing to maximize this potential in the near future.”

Icell Kealex Therapeutics is an oncology biotech startup based at JLABS at the Texas Medical Center in Houston, Texas. We are developing oncoloytic vaccinia viruses armed with T-cell-engaging antibody fragments that boost the virus’s antitumor efficacy. This modification in the virus allows the tumor cells that are not infected with the virus to be target by T-cells. Icell Kealex has a deep pipeline of T cell engager oncolytic vaccinia virus which offer an advantage over other oncolytic viruses. We plan to enter phase 1 trials with our lead product in 2018. We are looking for co-development or licensing partnerships
Follow