Aposense is exploring an overlooked powerful electric field present at the depth of every biological membrane, in order to energize a pipeline of therapeutic opportunities.

Aposense has forged a rare and exciting opportunity. This biotech company has built a pipeline based on a powerful biological phenomenon that has been overlooked by the rest of the biotech world. That phenomenon, the recently discovered membrane dipole potential, and its related internal membrane electrical field (IMEF) could enable Aposense to provide novel solutions to numerous unmet needs in drug development, ranging from extension of drug plasma half-life to the delivery of heavily charged macromolecules, such as small interfering RNA (siRNA), across biological membranes into cells.

The membrane dipole potential is a recently discovered voltage that is measurable in every leaflet of the phospholipid membrane. Because of the high hydrophobicity of biological membranes, the dipole potential translates into an enormously strong electric field of up to 1 billion V/m, spanning ~30 Å from membrane surface to membrane center. Before now, this phenomenon had not been explored in biotech or utilized in drug development.

That has now changed owing to the innovation of Aposense, which has made membrane dipole potential and its related IMEF the foundation of its research activities. Fascinated by the fact that every cell harbors its own discrete and strong powerhouse, Aposense is developing therapeutics that utilize this resource to improve drug performance.

Central to Aposense technology are rationally designed, innovative electrical molecular nanomotors (MNMs), a novel class of pharmaceutically compatible small-molecule drugs, energized by the IMEF and capable of translating the IMEF electrostatic energy into kinetic energy for movement within the hydrophobic membrane core.

Upon linkage to a cargo drug, this intramembrane movement of the MNMs can be utilized for energy-consuming tasks, such as moving the drug into drug depot sites generated at the depths of the phospholipid membranes, or enabling the delivery of macromolecular therapeutics such as siRNA into cells. In both scenarios, Aposense’s MNM system may improve pivotal drug features by, for example, increasing drug residence times in the body, enlarging the volume of distribution, accessing novel intracellular targets, or conferring metabolic stability. For its first target, Aposense has applied its IMEF-powered MNMs to improve the performance of anticancer drugs.

The first MNM developed by Aposense, designated ATT-11T, is a pro-drug that comprises the proprietary Aposense MNM, linked to the camptothecin anticancer agent SN-38. SN-38 is a highly potent topoisomerase I inhibitor and is the active moiety of the marketed anticancer drug irinotecan (CPT-11).

Irinotecan is widely used, mainly for colorectal cancer, but its therapeutic potential is not fully realized owing to its rapid excretion and its lack of pharmacokinetic synchronization with the target cell cycle phase (S phase) of the tumor cells, during which the drug should interrupt DNA replication and repair. In addition, irinotecan is associated with marked adverse effects such as cholinergic symptoms, diarrhea, and bone marrow suppression.

Aposense rationalized that the mismatch between pharmacokinetics and cell cycle observed with irinotecan could be solved through the conjugation of SN-38 to an MNM (Fig. 1). Energized by the IMEF, such a conjugate could form numerous pro-drug depots within cell membranes throughout the body. The subsequent slow release of the conjugate, with preferential accumulation, cleavage, and release of SN-38 within tumor cells, would enable prolonged, smooth, and stable drug levels, ensuring broad drug access to the target tumor tissue, and capturing the tumor cells in their vulnerable S phase for their eradication.

Extensive preclinical assessment indicates that the proprietary MNM–SN-38 conjugate meets these expectations. In nonrodent species, intravenous administration of ATT-11T manifested a >5-fold extension in plasma SN-38 half-life over irinotecan. Similarly, a dramatic enhancement of antitumor activity of ATT-11T over that of irinotecan was observed across numerous xenograft tumor models, such as melanoma, colorectal carcinoma, lung cancer, ovarian cancer, and pancreatic carcinoma (Fig. 1). Importantly, in all these models, ATT-11T induced dramatic tumor regression that often culminated in total tumor elimination, while preserving a favorable safety profile. Based on these data, and with a positive pre–investigational new drug (IND) meeting with the US Food and Drug Administration, Aposense is now approaching first-in-human studies with ATT-11T in patients with refractory solid tumors. 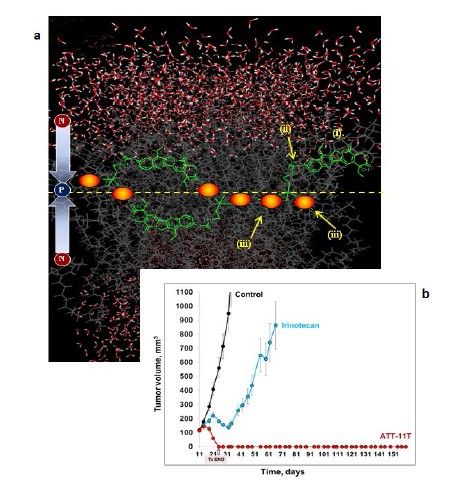 Figure 1: Mode of membrane interactions of ATT-11T. (a) (Far left) Cross-section of model phospholipid membrane of phosphatidylcholine, comprising the membrane dipole potential (blue arrows); N is the negative pole, and P is the postive pole of the IMEF, respectively. (Far right) The structure of the ATT-11T conjugate (i), SN-38 (ii) and carbamate bond (iii). MNM moieties. ATT-11T penetrates into the membrane core and generates intramembrane drug depots, with the MNM motifs (orange ovals) reaching the membrane’s midline (dashed yellow line). Subsequently, there is a slow release of ATT-11T to reach its target tumor sites. (b) Superior efficacy of ATT-11T over irinotecan in tumor eradication. Colorectal carcinoma xenograft model; MTD dosing regimen.

Expanding the pipeline: energizing the delivery of siRNA

Whereas ATT-11T was designed for small-molecule drugs, Aposense has generated second-generation MNMs aimed at ‘energy mining’ from the IMEF, in order to overcome the huge energy barrier for the delivery of macromolecule drugs across lipid membranes into cells. This barrier is the major current hurdle that holds back the promising field of siRNA based drugs.

Quite excitingly, Aposense MNMs may benefit from a unique situation—namely, for any cell in the body, both the unmet need (transmembrane delivery of siRNA) and the source of energy (the huge intramembrane electrical field) reside in the same place: the cell membrane. Aposense MNMs may therefore provide the required interface for ‘energy mining’ from the IMEF to energize efficacious transmembrane delivery of the siRNA drug.

By leveraging membrane dipole potential to address multiple therapeutic challenges, Aposense has put itself in the unusual and exciting position of having several disruptive and differentiating pipeline programs for addressing unmet clinical needs.

Aposense, an Israeli publicly-traded biopharmaceutical company (TASE: APOS), is focused on a novel and powerful natural energy resource: the membrane dipole potential, a recently-discovered voltage, measurable in every leaflet of any phospholipid membrane. The dipole potential translates into an enormously strong electric field of up to 1 billion V/m (!), spanning ~30 Å, from membrane surface to membrane center. Excitingly, this electric potential, and its related internal membrane electric field (IMEF) have not been recruited to date for any medical application. Fascinated by the fact that every cell harbors its own discrete and strong powerhouse, Aposense developed rationally-designed molecular nano-motors (MNMs), being novel small-molecule chemical entities, capable of "energy mining" from the IMEF, and its translation into kinetic energy, for movement within the hydrophobic membrane core. Upon linkage to a cargo drug, this intra-mem¬brane movement of the MNMs can be utilized for energy-consuming tasks, such as enabling the delivery of siRNA into the cytoplasm, where they exert their pharmacological effects, e.g., gene silencing, or moving the drug into drug depot sites generated at the depths of the phospholipid membranes. In both scenarios, Aposense’s MNM are improving pivotal drug features.
Follow