By applying its unique epitope-identification platform to develop candidate antibodies targeting amyloid-β (Aβ) prions, in addition to developing its own companion diagnostics, ProMIS Neurosciences is working to provide a personalized overall approach to the treatment of central nervous system (CNS) diseases.

Despite the best efforts of the pharmaceutical industry, Alzheimer’s disease (AD) remains a pressing and growing unmet medical need, killing more people than breast and prostate cancer combined. An effective therapy has proven unattainable to date, and the space is littered with failed drug candidates.

ProMIS Neurosciences’ personalized approach, which takes advantage of significant advances in the scientific understanding of AD, is set to radically change the Alzheimer’s landscape and treatment of the disease.

It is already known that Aβ exists in multiple forms in the brain. Monomers are generated continually and aggregate into oligomers, which may then further aggregate into fibrils and plaque. The consensus in the 1990s was that plaque was the problem in AD, which led to largely fruitless drug-development efforts focused on its clearance.

However, an increasing body of evidence indicates that the pathogenic drivers of AD are in fact soluble toxic oligomers, or prions. In some circumstances Aβ oligomers can become misfolded into prion-like species that are directly neurotoxic, propagate by causing new monomers to take on the same toxic form, and lead to tau phosphorylation and tau prion formation. It is these prion forms of Aβ and tau that are actually the primary drivers of neurodegeneration and cognitive decline in AD patients, progressively spreading throughout the brain and killing neurons. “There is now a new paradigm in Alzheimer’s biol­ogy: prion-like forms of Aβ, not plaque, are the neu­ron killers that drive disease,” said ProMIS CEO Elliot Goldstein. “Selectively targeting these prion-like oligomers, therefore, is critical for effective therapy to address the root cause of AD.”

Leading the charge and doing exactly that is ProMIS, whose core science capability lies in the identifica­tion of disease-specific epitopes (antibody-binding sites) in misfolded prion-like proteins. Its proprietary platforms (ProMIS and Collective Coordinates) use computational algorithms based on thermodynamic stability to predict which regions of Aβ oligomers are most likely to unfold—something that can’t be done by conventional physical techniques such as x-ray crystallography. “Ascertaining the conformation of epitopes—not just the sequence—is key,” explained Neil Cashman, CSO. “To our knowledge we’re the only company capable of identifying and targeting con­formational epitopes unique to toxic Aβ oligomers.”

ProMIS has identified five Aβ prion–associated epitopes and raised five sets of mouse monoclonal antibodies (mAbs) against them. A rigorous screening and validation process confirmed that these prod­uct candidates bind uniquely and specifically to Aβ prion-like oligomers, block neurotoxicity and inhibit propagation. In a mouse model of AD, administra­tion of ProMIS’s lead candidate PMN310 was shown to completely prevent the loss of short-term memory formation caused by toxic Aβ oligomers.

Past AD trials, although ultimately unsuccess­ful, revealed that antibodies can enter the CNS in amounts sufficient to have an effect, that antibody binding to monomers and plaque is wasted effort, and that plaque disruption is associated with an increased incidence of brain edema and microhe­morrhages. Because they target only Aβ prions, ProMIS’s candidates are anticipated to have strong efficacy with little risk of dose-limiting side effects. The lead program is on track to generate clinical data in 2020 with anticipated superiority to other monomer-and/or plaque-binding antibodies such as Biogen’s aducanumab. “While other candidates may be first-in-class, ours are expected to be best-in-class,” said Goldstein.

Furthermore, different AD patients are likely to have different strains of Aβ prions, and therapy targeted to address a patient’s specific strain will have greater efficacy than a ‘one size fits all’ treatment, explained Cashman. ProMIS is developing companion diag­nostics and a more general screening diagnostic to enable this precision treatment. An ongoing cohort study is testing the cerebrospinal fluid (CSF) of more than 100 AD patients to determine which Aβ prion reactivities are the most prevalent; initial results are expected by mid-2017. “These data could fundamen­tally change how people think about AD and have the potential to revolutionize treatment,” said Cashman. “The ability to detect Aβ prion strains in CSF or blood will allow us to personalize treatment and will ulti­mately enable early treatment that may slow or even prevent disease progression and symptoms.” 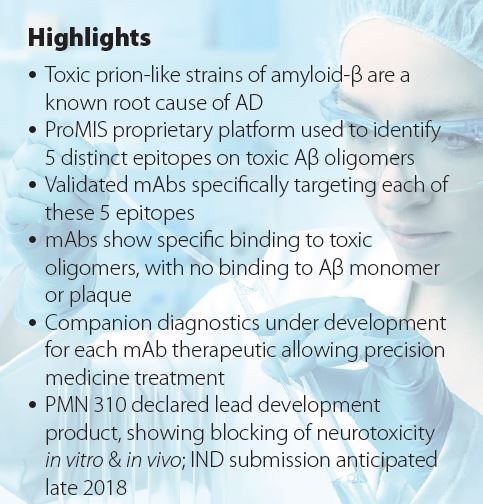 The ProMIS platform can be broadly applied to any misfolded toxic protein, including those that cause neurodegeneration in amyotrophic lateral sclerosis (ALS) and other disorders. Thus, ProMIS’s portfolio currently also includes three monoclonal antibody products targeting SOD1 (ALS), and the company has started to identify unique targets on toxic strains of tau (AD, tauopathies) and TDP43 (ALS, temporofrontal dementia).

In terms of its platform, AD antibodies and compan­ion diagnostics, ProMIS is looking for a major trans­action deal with a pharmaceutical or biotechnology company, potentially before PMN310’s investigational new drug (IND) application in 2018 or after proof-of-concept studies in 2020/2021. The company is also interested in a potential partner to develop a blood-based AD screening diagnostic.

“We have a proven track record of designing and creating novel therapeutic candidates for neurode­generative diseases rapidly and cost-effectively, and our portfolio could change the standard of care in AD, an area of tremendous value-creation potential,” said Goldstein. “By providing the right drug for the right patient, our precision medicine will have the same significant impact in AD and other neurode­generative diseases as tailored treatments have had in cancer.

ProMIS Neurosciences, is a TSX listed Company (PMN.TO) headquartered in Toronto, Ontario, with offices in Cambridge MA at the Cambridge Innovation Center. The Company’s mission is to discover and develop precision medicine therapeutics for best in class treatment of neurodegenerative diseases, in particular Alzheimer’s disease (AD) and ALS. ProMIS Neurosciences’ proprietary target discovery engine is based on the use of two, complementary techniques. The Company applies its thermodynamic, computational discovery platforms—ProMIS™ & Collective Coordinates — to predict novel targets known as Disease Specific Epitopes on the molecular surface of misfolded proteins. Using this unique approach, ProMIS is developing novel antibody therapeutics and specific companion diagnostics for AD and ALS. ProMIS has identified five target sites (epitopes) on toxic, misfolded strains of Amyloid beta, a root cause of AD, and created five antibodies specifically addressing these targets (without targeting amyloid beta monomer or plaque, known to be related to poor efficacy and side effects, respectively). ProMIS’ lead antibody product, PMN310, is in late preclinical development, with IND submission anticipated in late 2018. Large pharma companies have invested over $1BB in clinical trials targeting Amyloid beta over the last decade. Significant scientific conclusions can be drawn from results of these trials, indicating that best in class AD antibody therapy should target specifically the toxic, misfolded strains of Amyloid beta and not the other forms. ProMIS’ AD program is specifically designed and is on track to achieve this goal.
Follow